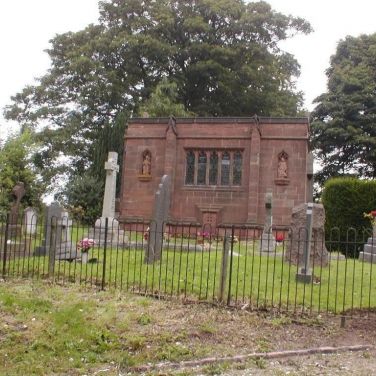 This mausoleum was erected in 1897 by Mrs Anna Bateman, wife of the late Sir Hugh Alleyne Sacheverell-Bateman who died in a riding accident in Morley Hayes wood on 26th October 1896. Sir Hugh was Lord of the Manor of Morley but never lived in the original manor, which had been demolished many years earlier.

The building was designed by George Frederick Bodley with stained glass by Burlison & Grylls.

Sir Hugh was born on 31st August 1860, the son of Thomas Keelinge Bateman of Hartington Hall. He was a descendent of the Sacheverells from whom the Bateman family inherited the Morley estate in 1757.

He married Anna Bridges on 7th June 1888 in London. Sir Hugh was then 27 years old and Anna 22. They lived at Etwall Lodge and built the present-day Morley Manor towards the end of the century, but Sir Hugh only lived there briefly before his death.

Anna subsequently married a naval officer, Commander Russel Lister-Kaye, on 16th October 1913. She died in 1947 and is buried in a lead-lined coffin, in a large vault just outside the mausoleum East wall.

Anna’s sister, Edith Mary Greenfield is also buried in the mausoleum. In addition, there is a plaque on the wall in memory of her only nephew, Ronald Greenfield who was killed in Action at Les Boeufs on the Somme in 1916, aged 19 years. There is also a memorial tablet dedicated to him in the adjacent St Matthew’s Church.

In 1996 the newly-formed Mausolea and Monuments Trust expressed an interest in the possible restoration of the mausoleum with the help of Heritage Lottery Funding. However, in order to do this, they needed to ‘own’ the building and to first establish whether there were any family members still around. However, as a result of an earlier search by a parishioner to trace any existing family members one had been found in 1988 who proved to be the great nephew by marriage and assumed heir of Sir Hugh Alleyne Sacheverell-Bateman.

This gentleman turned out to be the 18th Duke of Valderano*, formerly Lt. Col. Ronald E H Waring, grandson of Edith Mary Greenfield, Mrs Bateman’s sister. Anna and Hugh did not have any surviving family and young Ronnie was looked upon by Anna as Sir Hugh’s son and heir. After Sir Hugh’s death, as a little boy Ronnie had spent many happy hours staying with his great aunt at Morley Manor.

At the request of the Trust he was happy to sign over the building to the Trustees which then enabled them to apply for the necessary funding.

On 2nd July 2005 a celebration was held at Morley to mark the completion of the restoration of the building and this was attended by the family of the late Dr Jill Allibone, foundress of the Trust who had since died in 1998. In addition, the craftsmen who had been responsible for the restoration work were also present with their families, as were members of the Trust itself. Unfortunately, ill-health prevented the Duke of Valderano from attending and sadly he passed away a few months later.

The work, costing over £60,000 included the re-facing of the external stonework, restoration of the wrought iron gates and family crest, the stained-glass windows, the roof and drain-pipes. A framed, parchment inscription was also restored. The project was overseen by Mark Parsons of Anthony Short & Partners, Architects.
The funding came from English Heritage, the Glaziers Trust and the Barbara Whatmore Charitable Trust as well as funds raised in memory of Dr Jill Allibone by her family and friends.
The mausoleum was built in the grounds of the original Morley Manor where a small section of the boundary wall and gateway still remain today at the entrance. A condition of being allowed to erect the building was that Mrs Bateman agreed to give the rest of this piece of land as an extension to the graveyard. The old wall was restored as part of the project.

Until 1970 a small sum of money had been sent, through the Westminster Bank in London to the rector of Morley to be paid to the Sexton for the upkeep of the mausoleum. It then suddenly stopped which suggested that the donor (who remained anonymous to the parish) had died.

In the early 1980s a large beech tree adjacent to the building was deemed to be unsafe and in urgent need of felling. Concern was expressed that should the tree fall down before there was time to fell it safely, it may smash through the building. The Parochial Church Council was therefore urged to try and trace any family members who could be held responsible for its upkeep. If none existed then a Trust could be formed with a view to raising the necessary funds for restoration.

After much searching the Duke of Valderano was eventually discovered and although keen that the building should be restored made it clear that he was not in a position to help with this financially.

In 1996 the Duke was only too happy when approached by the Mausolea & Monuments Trust to sign over the building to them thus enabling the Trustees to raise the necessary funds for restoration.

The Mausolea & Monuments Trust website features the Sacheverell-Bateman Mausoleum together with other similar buildings for which it is responsible.

*This was intended to be ‘Valdarno’ but an unfortunate spelling error occurred when the original dukedom was created.